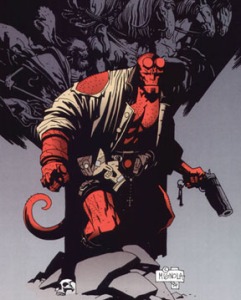 This is news that actually made Rek smile this morning.

Hellboy is getting a rated R reboot.

Rek has been reading the comics as of late and he has become a pretty big fan, so this news is exciting to him. Not many details are known as of right now, but what we do know is that Ron Pearlman will NOT be reprising his role and Guillermo Del Toro will also NOT be directing the reboot of this franchise.

Neil Marshall, the horror director behind the movie The Descent and who also worked on Game of Thrones, is attached to direct the project, which has a working title of Hellboy: Rise of the Blood Queen and has a script by Andrew Cosby, Christopher Golden and Hellboy creator Mike Mignola, who broke the news on his Facebook page.

David Harbour of Stranger Things is in talks to star.