Welcome to our new top five for Thursday. Today we are going to be writing about our picks for the best Star Wars spin-offs that we want.

Besides the fact that the Darth Vader Comic is the best one since the Marvel reboot, and that he is known as the best villain for decades, we can’t believe we still need to ask for a solo movie for him. Think about it, a movie focused around Vader hunting down hidden Jedi or leading armies of Stormtroopers. There is so much that you can do with this character. A group of the best clones in the entire Republic go around on suicide missions and save the galaxy. That is so freaking cool right? It seems that they aren’t afraid to change the status quo when it comes to these spin offs with Rogue One feeling way different than any Star Wars movie before it. Why not have a Military Thriller like this in the works?

I know that everyone wants a Boba Fett movie, but I would rather have a hundred of armies like Boba Fett on screen. During the times of the Old Republic, there was a giant war between the Jedi, and the planet, Mandalore. On Mandalore, it is a part of their rite of manhood to kill a Jedi, of course this became increasingly difficult, so they grew a large army to face the Jedi and attempt to destroy them. It’s really cool to see these normal people as warriors taking on the force-wielding Jedi. Lots of Jedi die, but it is just an awesome war that they have hinted at in The Force Awakens.

A movie that surrounds Obi Wan while he watches over Luke may sound boring to the average movie goer, but think about all of the trials that he is going through with Qui-Gon and what is going on in the galaxy around him. It makes for a pretty awesome film. Throw in Ewan Mcgreggor and it doubles the greatness. He was the best part of the Prequels. 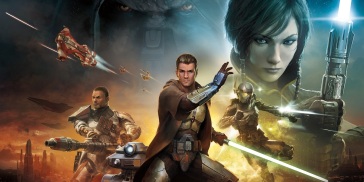 Anyone who knows anything about The Old Republic knows that it would make for a pretty boss movie. An era where the soldiers can literally face down the Jedi or the Sith in hand to hand and have a chance at winning. A time where there is more than two Sith Lords existing. Not to mention the fantastic story about Revan, which is amazing.

That whole time period in the Star Wars universe is epic and would make for a great movie.