Marvel Studios has just cast Person of Interest actor Winston Duke as the villain M’Baku, also known as the Man-Ape in the new Black Panther film. That’s in addition to previously announced villain Erik Killmonger, who will be played by Michael B. Jordan. 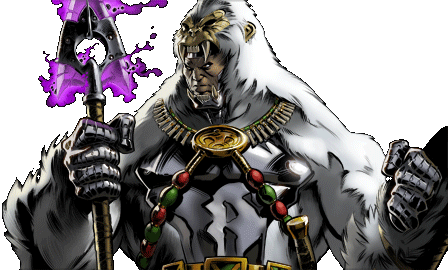 In the comics, M’Baku is one of the greatest warriors in the nation of Wakanda, right up there with T’Challa a.k.a. Black Panther. The two begin as friends but become enemies when M’Baku attempts to overthrow T’Challa as ruler of Wakanda. M’Baku gains enhanced superhuman strength, speed, and stamina after killing a rare white gorilla to bathe in its blood and eat its flesh, and begins calling himself the Man-Ape.

This isn’t a total shock. Lupita Nyong’o said in an interview earlier this year that, “Black Panther’s leadership has been threatened by two foes who come together, and so Black Panther gets the help of the C.I.A. and the Dora Milaje to try and defeat the enemy.”

Creed director Ryan Coogler is not only directing, but he also wrote the Black Panther script with Joe Robert Cole. Shooting is expected to get underway in early 2017 for a February 16, 2018 release date.