Hello everyone! MamaSeppinRek here, or MSR as they call me. I felt so passionate about the new series on Netflix, The Crown, that I told Seppin and Rek that I was writing a review whether they liked it or not.

Luckily, they were cool with the idea.

Based on an award-winning play (“The Audience”) by showrunner Peter Morgan, this lavish, Netflix-original drama chronicles the life of Queen Elizabeth II (Claire Foy) from the 1940s to modern times. The series begins with an inside look at the early reign of the queen, who ascended the throne at age 25 after the death of her father, King George VI. As the decades pass, personal intrigues, romances, and political rivalries are revealed that played a big role in events that shaped the later years of the 20th century.

MSR Review: Yes, there will probably be spoilers, sorry!

Oh, where to start? I have to say that I was surprised many times during this show because I had thought it was just going to chronicle the romance and marriage between Elizabeth and Prince Phillip. Well, I was wrong to assume that was going to be the major premise and that’s what makes this show even more fantastic.

The Crown doesn’t just follow Elizabeth and her first years as queen. The show also features her family members, the former King George VI, her mother, her grandmother Queen Mary and also her sister, the infamous Princess Margaret.

The show cleverly intertwines the family as Elizabeth takes the crown and you really become emotionally invested. The first few episodes are towards the end of King George’s life and how they cope with his illness. I have read quite a bit on the closeness of the family, but you really feel like you are going through it with all of them as you watch this heartbreaking event.

There is one scene right before he dies and he and Margaret are singing together (Bewitched, Bothered& Bewildered) and I had tears in my eyes. It was lovely, absolutely lovely. Also the Princess Margaret and Peter Townsend affair is front and center. 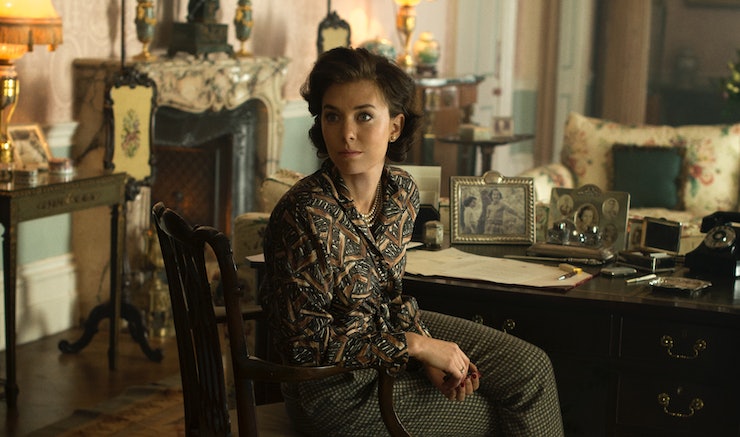 The one person though that is most affected by Elizabeth’s premature ascension to the throne is Prince Phillip and the show really brings to life the struggle that he has to cope with as well. You have to remember this is the early 1950’s. Men did not take a woman’s family name and just imagine if you will going from being a busy Navy officer to being a consort for your wife whenever she needed you, but not be able to be a part of her daily life in some ways. He couldn’t help her go through the big, red box full of reports every day, nor could she confide in him the secrets of the nation. You could feel his struggle as he floundered while trying to come to terms with this new role in his life.

It’s truly a wonder that their marriage survived and towards the end of the season, you see the strain that had taken hold on to their relationship.

The other aspect of the show that I did not expect was the addition to the cast of another famous figure and that was John Lithgow who played Winston Churchill. He was outstanding! I didn’t know at all that they were going to show so much of Churchill, but again, their lives parallel one another beautifully. She at the start of her glorious career and he at the end of the most distinguished in British history. 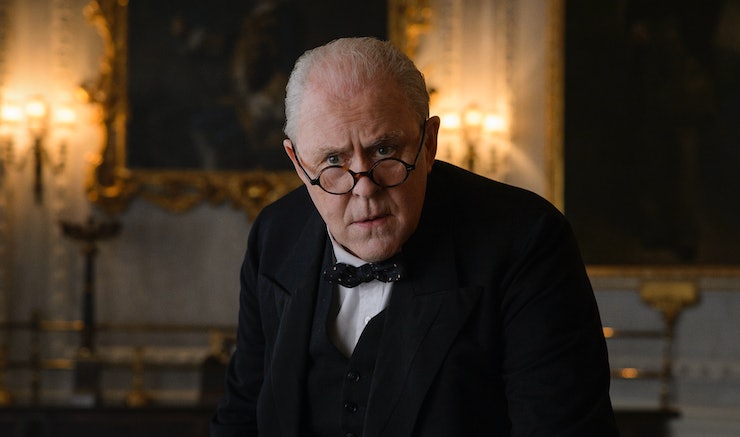 We also were treated to seeing the former King Edward VIII and Wallis Simpson. He was definitely a polarizing figure, but there was one scene where he was watching the coronation from Paris (Because his wife was not invited so he wouldn’t come) and he was telling the crowds who had gathered there what was happening. This was a remarkable scene in my view and you could tell even though he loved Wallis Simpson, there was still an amount of regret, but you couldn’t feel too sorry for him because this portrayal really made him out to be selfish and he never really accepted the fact that NO ONE else accepted Wallis. It was a hell of his own making, but he seemed to blame everyone else for it. 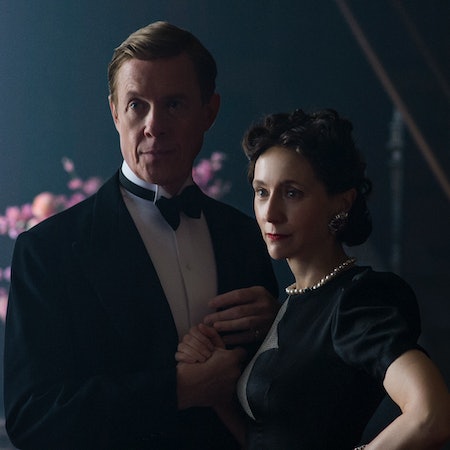 The Crown is not only superbly acted, but it is a fascinating historical drama that is a much watch. I cannot say enough how much I enjoyed this show and I am eagerly awaiting for the next season so I can witness even more of Elizabeth’s journey!