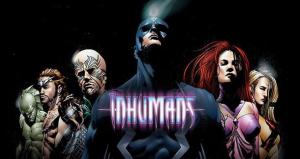 The first teaser poster for Marvel’s Inhumans has been released and the tagline on Twitter stated two words, “Beyond Humanity.” The poster also includes the symbol that Black Bolt wears in the comics. Take a look below:

Marvel will debut the first two episodes of the series in Imax this September before it’s debut on television, September 26, 2017.