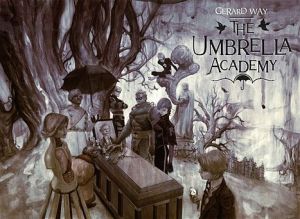 We’re going to come right out and admit that we don’t know much about The Umbrella Academy, but we are big Dark Horse Comics fans, so this news is pretty cool.

Netflix has announced they are going to do a ten episode drama based on the acclaimed comic by Gerald Way and Gabriel Ba. It’s to debut in 2018.

“I am thrilled that The Umbrella Academy has found a home at Netflix,” Way, the former frontman of My Chemical Romance, said in a statement. “I couldn’t think of a better place for the vision Gabriel Bá and myself had when creating the comic, and cannot wait for people to experience that world as a live action show.”

The live-action series follows the estranged members of a dysfunctional family of superheroes (The Umbrella Academy) — Spaceboy, The Kraken, The Rumor, The Séance, Number Five, The Horror and The White Violin — as they work together to solve their father’s mysterious death while coming apart at the seams due to their divergent personalities and abilities.

It sounds interesting and we now have another comic series to add to our growing pile.