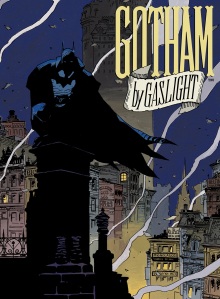 WB has released the first look at their next animated film, Batman: Gotham by Gaslight .

This one-shot story was set in the 1800s, and pitted the The Dark Knight against none other than Jack the Ripper and is considered to be the first of the “Elseworlds” stories, which take DC characters out of their canonical settings and into alternate timelines or realities.

It’s about 8 minutes long, but it does provide an amazing in-depth look at the story. No release date has been given.