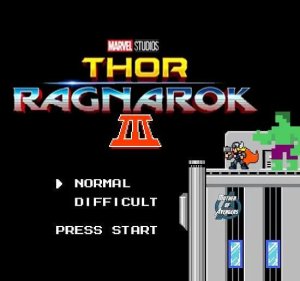 Director Taika Waititi posted a photo to Instagram which teased a character’s appearance in Thor: Raganarok.

Waititi share a photo of a Korg keyboard and told fans to “watch this space.” It looks like the alien will make an appearance and this clue may tie in the Hulk’s role in the movie.

The character faced down with Thor after his brethren attempted to overtake Earth, leaving him enslaved on the alien planet Sakaar as punishment. Korg was controlled by the Red King by an obedience disk that forced him to fight in a gladiator-styled arena. Korg becomes an ally to Hulk after the green giant is exiled to Sakaar. He was also part of the gladiator group who rebelled against the Red King once the Silver Surfer was able to destroy the obedience disks which controlled their actions.

He also made a brief appearance in Thor: The Dark World.

It has been heavily rumored that the film will explore Planet Hulk elements and there are other rumors that have said both Thor and Hulk will be seen ‘in some gladiatorial games run by the Grandmaster’ who we know know is being played by Jeff Goldblum.