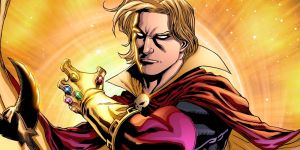 We knew he was going to show up eventually and it seems that Adam Warlock will make his appearance in Guardians of The Galaxy Vol. 3!

Director James Gunn and Marvel Studios’ Kevin Feige recently spoke about Warlock at a press junket when asked whether he would being Avengers: Infinity War:

“He’s not. He’s not in Infinity War. But he will be a part of the future Marvel cosmic universe and a pretty important part of that.” -JG

“[Adam Warlock’s arrival] will not be until Guardians 3. Adam is not a part of Infinity War, which of course he is in the comics, but James [Gunn] did always really like Adam Warlock, and our version of Infinity War is the culmination of all the stories we told up to this point.:-KF

“James has had ideas to introduce Adam—certainly there were ideas in Vol. 2, maybe even in part one, but part two for sure—which were great, but the way the story was coming together, there just wasn’t time for that.”-KF

We’re a little surprised that he’s not being introduced in Guards 2 and before Infinity War since in the comics he plays such a huge role in helping defeat Thanos, but perhaps Warlock will have a bigger presence in the next Avengers film.