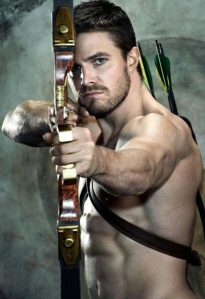 The show released a short preview on the fuirst ever celebrity edition and Stephen nailed it. Amell was taking part in Red Nose Day, which raises money and awareness to help children living in poverty in America and around the world.

“People have always wanted to see Stephen on the show,” Matt Iseman, host of American Ninja Warrior, said. “I’m an Arrow fan and when I first saw the Salmon Ladder in the Arrowcave, I thought, ‘This sonuvab–ch is a fan of Ninja Warrior!’”

You have got to check this out!

The special celebrity episode will air Thursday, May 25 at 8 pm ET on NBC.