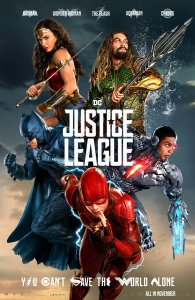 We’re getting close to Justice League and marketing is going into overdrive!

Warner Bros. & DC Comics are teaming up with Mercedes to offer up a six issue comic series that will tie into the film.

It started as a simple joyride. When they confront a raging fire, will Barry Allen and Victor Stone’s superpowers be enough to save the day? #JusticeLeague is coming to theaters November 17th. #DCComics #MercedesBenz #VGT #Batman #TheFlash #Cyborg

BUCKLE UP FOR A JOYRIDE WITH BATMAN, WONDER WOMAN AND MORE
IN NEW JUSTICE LEAGUE COMIC

Produced exclusively for the Mercedes-Benz Instagram channel, the six standalone stories focus on the private lives and alter egos of Justice League team members, including Bruce Wayne, Diana Prince and more, as they save the day with a little help from their heroic Mercedes vehicles. The series is written by Adam Schlagman who serves as Creative Director, Theatrical at DC Entertainment, and is drawn in the film actors’ likenesses by fan-favorite artist Jason Badower.

“We are glad to launch the first of six exclusive digital comic stories on our global Instagram channel today. This innovative approach reflects our urge to always offer exclusive and unique content to our worldwide social media fan base. Stay tuned, there are more great campaign assets to come before the release of Justice League on November 17, with many more insights of this remarkable global partnership,” says Dr. Jens Thiemer, Vice-President Marketing Mercedes-Benz Passenger Cars.

Each installment will be promoted with custom MOVs and teaser imagery posted across the auto company’s social media channels, including Facebook, Twitter and Tumblr. The comic was produced by DC’s Custom Creative Studio, the premier custom content creation team at DC Entertainment.

This is a great promotion idea!