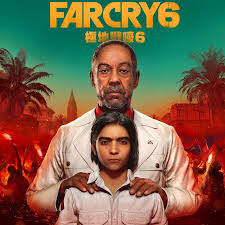 Hey everyone! Hope everyone is staying safe during this crazy time and ready to hear some good news. Although it sucks that E3 was cancelled this year, Ubisoft just made their first Ubisoft Forward conference today and showcased their upcoming games.

Firstly, they unveiled a new look at Watch Dogs: Legion

Then, there were announcements for Brawlhala coming to mobile, Tom Clancy’s Elite Squad, and another effing battle royale game, Hyper Scape.

More importantly, Ubisoft gave fans some new footage from Assassin’s Creed Valhalla which looks really fun! Check it out below!

And, last but not least, FarCry 6! This trailer looks absolutely spectacular and we are all super hyped to see Giancarlo Esposito portray this dictator antagonist in the new game. Watch the title sequence first and then the official trailer! Both are colorful and chaotic!

Well, that’s gaming news in a nutshell right now! Sucks to miss out on such big events like E3 and Comic-Con, but us fans just need to make do with what we get. Anyways, what game are you most excited for? Tell us in the comments below!