Hey everyone, we have decided to start a new segment that will act as a top five Tuesday sort of deal. We are going to start it off with DC movies that we personally want to see in their lineup.

For those that do not know who these two guys are; they are Blue Beetle(Ted Kord) and Booster Gold. I mention Ted Kord’s Blue Beetle because the first guy (who no one knows or cares)later dies and someone, Ted Kord, will go by that name. Ted Kord is a billionaire that has done research into making gadgets and completely designed his own suit. So he is similar to Batman, but he is easy going and funny. Booster Gold is some loser from the future that goes back in time with his tech to become a well known superhero. Most people that know them are aware that they are good friends, so that leaves the possibility to a buddy-cop movie. This isn’t the first time it’s popped up though, many sites are saying that a Blue and Gold movie is in DC’s plans. That is why it gets Number Five.
The Greatest story never told…
* I nominate Tom Hardy as the Blue Beetle *

I know, Man of Steel wasn’t that great for most people, but I think if they tried to make a strong sequel it would succeed massively. I did sort of enjoy Man of Steel; it did an accurate representation of the New 52 version of the hero. It was a bit bland because they had to introduce his origin and all that right away. We all know that Jor-El was the star of the movie, so it would be great if they made Superman this hardcore character that can fight instead of crying and hitting stuff. A rumor of this movie has also moved around so that is why it is Number Four.

Recently Zack Snyder remarked that Batman vs. Superman is actually Man of Steel 2, but I don’t agree with that..sorry Zack, I know you’re the director and all, but it’s way more focused on Batman.

They did announce a Green Lantern Corps movie is scheduled for a 2020 or whatever release, but that is preposterous. He is one of DC’s powerhouses. Most people know who Green Lantern is all ready. We don’t need another origin movie…look how well that worked out for Amazing Spiderman. We want this story a lot because it has to do with the emotional spectrum of the legendary rings of the Corps. and it leads to an amazing story arc. You could even have the Justice League make an appearance as the black Lanterns. Plus it would be great to have most of the Earth Green Lanterns working together throughout the movie as planned. You could lead away from the Brightest Day event if they wanted to. Just to have Hal, John, and maybe Kyle working together would be cool. 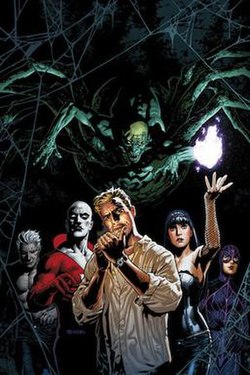 Another surprise to most of you is a Justice League Dark movie. The best way to describe them is a version of the Justice League that are all magic wielding characters. With John Constantine as your leader, nothing can go wrong, because he is their equivalent to Batman. John is a British exorcist that uses his abilities in the dark arts to save people from the demons lurking around. Deadman, AKA Boston Brand, is an acrobat that died after some shady dealings in his life. He basically has to repent for what he did as a ghostly form so that no one can see and knows he’s there. Funny side note, Batman always senses when he is around. Deadman uses a form of possession to take over people’s subconscious to make them do the right thing. Enchantress is a hero some of the time that is basically just a witch. Zatanna is the daughter of the great magician Zatara, who was a founding member to the Justice League. Swamp Thing is the monster of the swamp that uses his host to get vengeance on those that try to destroy it. Guillermo del Toro wrote a script for the movie, but he has left the project as usual. We think that George Miller should direct the film after his great work on Mad Max. Warner Bros. should snatch him up for something in return for a sequel. This is why it is Number Two.

1. Batman: Under the Red Hood

Yes! I am a huge Jason Todd fan, as I keep saying, so it is only natural that I put this as number one. I freaked out after I saw Jason’s robin suit featured in the Batman V Superman Trailer. The fact that they added him into the movie, especially the trailer, means that they are willing to use him as a future character. After the fan uproar too, I bet that our first Batman film by Ben Affleck and Geoff Johns will be Batman Under the Red Hood. This would be the most amazing Batman film ever!!! Jason is the second Robin who is killed by the Joker and comes back to life and tries to force Bruce to kill the Joker. In the end, Bruce doesn’t, and this makes Jason depressed and sad, but this could help lead up to a whole Bat family in the future. If only they got Jensen Ackles to play Jason. Since he is in Supernatural, owned by CW, Co owned by Warner Bros, Who Own the DC movie rights. Connections to a perfect film.