Hey everyone, I’m sorry for the wait, but I wanted everyone to see the beginning of this great season. For those that may not be aware of the significance, Arrow started DC’s live-action universe on CW. It’s the reason Flash got a show and it is coming up on possibly one of it’s best seasons yet. The show is about one of DC’s minor vigilantes, The Green Arrow, aka Oliver Queen. He is a billionaire that, after a traumatic experience on an island, decided to protect Star City. So let’s get started. *Spoilers if you haven”t watched any of it*

Wow, this is really great in my opinion. I think that it was a brilliant idea to portray Oliver less like Batman and more like the wise-cracking Arrow many love. It feels really fun like Flash, but continues the seriousness the show always has had. It starts with Ollie running in the forest with a green hoodie, but then we see that he is not running to catch bad guys, but he is running in a friendly neighborhood living with Felicity. I don’t know about you guys, but it is funny to see Oliver in the ‘normal’ environment. We then see that Thea, Laurel. and Dig have been working on protecting Star City after Ollie left, but these crooks seem to be more than your average run of the mill thieves. So of course, the only way to solve their problem is to ask Ollie to come back. This conveniently sucks for Ollie because he was literally about to propose to Felicity. This is probably going to be held back to the season finale.

When Ollie makes it back to the Arrowcave, we see that him and Dig still don’t trust each other after Ollie kidnapped his wife. We also see the aftershocks of Season three and witness Team Arrow not taking orders from Ollie anymore. We get to meet Damian Darke right away in the season. We also get to see his mystical abilities being used. When Ollie mentions that he is aware of the mystic arts that freaked me out because we know that Matt Ryan will re-star in his role as John Constantine from the canceled NBC show. I am so excited that Constantine is coming to the CW shows because it will be our first real nod towards of magic in the DC television universe.

We also know that Damian Darke is the leader of H.I.V.E, which in a previous season, Dig found out that they hired Deadshot to kill his brother. Maybe we will finally find out why Andy Diggle had to die this season. I hope that everyone saw the Green Lantern tease in the flashback. We see someone in a pilots coat that has the name “Jordan” on the shoulder. It obviously is hinting at the first Green Lantern Hal Jordan who is great friends with Ollie in the comics so this would be a perfect way to introduce their friendship, especially with Geoff Johns in DC. He wrote the recently great Green Lantern Arc with Darkest Night. 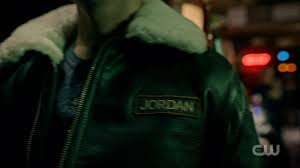 Really Lance, really? You may be protecting your daughter, but you are the greatest cop in the Police department. You shouldn’t be giving into Damian Darke especially after he killed the the city officials. We see Thea going a little too far when fighting people. Of course this is because of the after effects of the Lazarus Pit. She has become similar to Jason Todd in the way that she is fighting too hard and losing control with her actions. My favorite character is Red hood, so I love what they are doing with Thea. I also love the new suit for the Green Arrow. I don’t think that they could get much closer to the one in the comics  without making it look goofy.

Until Next time, bye- Seppin