Hello Everyone, today we are going to do something a little different with the recent release of DC’s Rebirth comics. Specifically the first issues for the Rebirth event, Batman Rebirth, Superman Rebirth, Green Lanterns Rebirth, and Green Arrow Rebirth. We are going to try our hardest not to spoil the comics, but since they just started nothing to big has been revealed yet. In a way it will work similar to a Wrecking Rek.

This will have spoilers!….

This comic is the start of the Rebirth event. DC will be heading back towards it’s roots and slightly change the New 52. We enjoyed seeing the original Wally West again and following him on his quest to save his Earth/Timeline. We saw many characters and what they are doing at that moment of time. Of course the first person that Wally goes to is Batman. We’re pretty sure that is a rule for whenever you are in a strange and different world, go find Batman.

Although Bruce was still plagued by thoughts concerning the Joker’s identity. Wally also visits many other heroes including the Superman from Lois and Clark who is trying to find his life in this new Earth. He even goes to this Earth’s Linda Park, but she doesn’t recognize him and this saddens Wally, especially since he is about to be sucked into the Speed Force.

Wally finally leaves to confront Barry and say goodbye. Barry is confused since he doesn’t remember this version of Wally until he reaches out and grabs him. Then he pulls Wally out of the Speed Force and into this Earth. That isn’t how we end it though because we see Batman again while he is staring at his father’s letter to him that Barry delivered him during the Flashpoint Paradox. Bruce sees a flash of color in the corner of his eye and he digs into the wall until he pulls it out.

It is… The Comedians badge from the infamous graphic novel “Watchmen“. This confirms that the Watchmen are connected to the DC universe, in fact we see a scene from Watchmen when Dr. Manhattan is on Mars. Overall it was an amazing comic that felt incredibly similar to the old school DC we fell in love with. 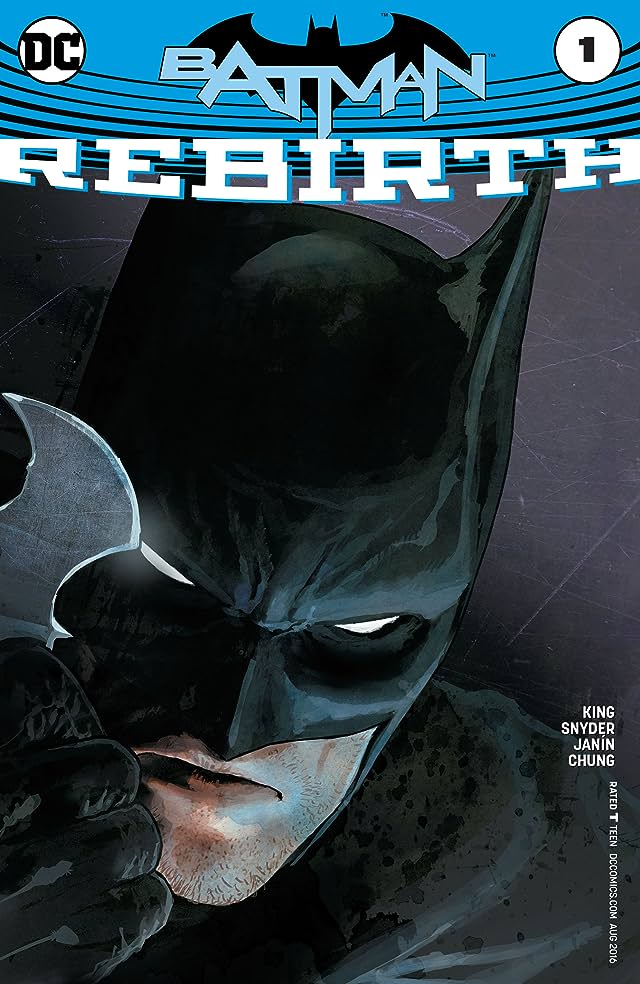 I was so excited to read the first issue of Batman for Rebirth, and it doesn’t disappoint. It gives us the New 52 Batman in a way that makes him very reminiscent of the past incarnations. We see him pushing himself harder than ever before.

Before I started reading this comic I wondered what they were going to do with Duke Thomas since he isn’t Robin anymore. I was surprised to see them answer that question right away in the comic. We see him in his own version of a Bat suit. From this we can insinuate that Bruce is training Duke, not to be Robin, but something else. Maybe his replacement? We’re not sure yet.

The Calendar man was a suitable villain for the comic and I like that it is all based around Gotham being “REBORN”. Overall it was an amazing Batman comic and I can’t wait to read more.

In our first issue of Superman rebirth we follow the aftermath of Superman’s death. We see the Superman from the Lois and Clark comics, aka the silver age Superman, wait for our Superman to return from the grave. He is expecting him to return because he did after Doomsday killed him. Clark is putting a lot of faith in Superman’s return and is surprised to see Lana Lang trying to steal Superman’s corpse because she promised to bury him with the Kent’s in Smallville. So we get this great character interaction between her and this other Clark as they are trying to help Superman return.

I wasn’t too excited for the Superman comic since I don’t usually read them, but this was good and I’m excited to see where they go with this.

Just to start off I want to say that I love it when Geoff Johns writes Green Lantern. He’s the reason I got back into DC because I had to read Blackest Night and Brightest Day.

Now to the comic. I really enjoyed reading about the two newest Lanterns, Simon Baz and Jessica Cruz. We continued learning more about Simon Baz’s character and what he goes through. The people of Earth aren’t fans of the Green Lantern Corp. right now and are discriminating against Baz. We also see how Jessica is fitting in without Volthoom’s influence. Volthoom is the spirit that controlled her while she was Power Ring and was destroyed recently causing her to gain a Green Lantern ring for being courageous.

We see them meet and fail at fighting a Manhunter. It turns out that Hal Jordan was testing them to see if they are up to the challenge of defending Earth while the other Lanterns are gone. We also see that they aren’t going to work together well, so obviously we are going to see them learning to become a team and defend the Earth. I am highly excited to see what Geoff Johns does with this comic.

From Rebirth we saw that Green Arrow and Black Canary are going to finally meet for the first time. I also heard that we were going to be seeing a new villain face the emerald archer. I love the show and after catching up on his comics I was extremely excited to read this.

Again it did not disappoint me. I actually really loved the artwork and the action that occurred during the comic. I like how he is drawn and how they avoided using the trick arrows, since that has always been an option for the archer. We get a little bit of back story and some description to the character that is perfect. They talk about him being a billionaire and reference his time on the island. We see Dinah helping the homeless and Ollie help out after finding out about the abductions. They go to the jungle and fight the minions that are taking the homeless. Ollie and Dinah fight perfectly together when they go to the auction where the homeless people are being sold off. This leads to Ollie making a promise to one of the buyers that there will be justice and then Ollie, and Dinah, go over to talk at his penthouse.

Overall I really enjoyed this comic and I am optimistic about seeing the Green Arrow’s story play out in the new Rebirth.