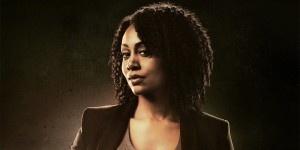 Actress Simone Missick revealed that not only is she excited about playing Misty Knight on Luke Cage, but she will also be joining The Defenders cast.

“I believe I’m safe to say that I will be on The Defenders.”

A number of supporting characters from Daredevil and Jessica Jones have already been confirmed as appearing in The Defenders, but we can now add someone from the world of Luke Cage.
In the Marvel comics universe, Misty starts off life as a New York City police officer before she is injured in the line of duty and loses her right arm. Tony Stark takes pity on her, designs a robotic arm replacement that provides her with super-strength, and the character begins her own superhero career similar to a Jessica Jones style detective agency and start up a romance first with Iron First and then Luke Cage.

We’re not sure if we’ll get to see her receiving her bionic arm, but it is exciting to hear about all these characters coming together for The Defenders!
Don’t forget tomorrow Luke Cage premieres on Netflix!
~Seppin
~Rek