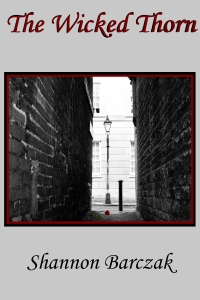 Did you know that MSR is an author? Did you also know she is an Amazon best-selling author?

We’re not saying we inspired her latest book, but let’s face it, we did. Seppin also designed the book cover, so you know it’s going to be good.

For the next five days, her new book The Wicked Thorn is FREE on Amazon, so go and download it. Show her some love because she is pretty awesome.

The headlines were screaming and the city was reeling from the appearance of a new vigilante in town!

Boston was ripe with corruption and criminal activity after the economic downturn. The police, though, had a new threat as the rise of a vigilante, nicknamed The Wicked Thorn, threatened to undermine their entire department. The masked hero was quickly gaining admirers, but could he truly save his beloved city from crime?

Bry McKenna is a best-selling young adult author that seemingly has it all going for her at such a young age. Her fans see her as a fresh voice in this genre, but in private, she is struggling to break free from her family’s overprotective, watchful eye and become more independent. As she spreads her wings, she not only finds her voice, but she also meets an intriguing, charming new man.

As her life crosses paths with The Wicked Thorn, and she becomes more entangled with vigilante justice than she ever dreamed of, will she be able to accept him and his life, or will she walk away before she in too deep?

Join Bry as she enters this foreign and violent reality. A world where vigilantes are real and the need to protect those they love are even more passionate than she could have ever imagined.