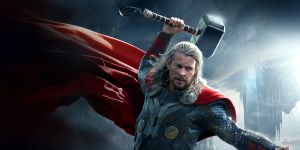 Marvel sent out another trailer for THor Ragnarok. It contains some footage of Benedict Cumberbatch’s Doctor Strange. It looks like we will be seeing more of their meeting during the end credits of Doctor Strange. Strange hints at great change coming for Thor, so is Asgard actually going to die? We don’t know, but it would be a big deal if that happened.