The Arrowverse is a crazy world that has a few of DC’s popular heroes, but they also have a ton of DC’s lesser known characters. In this top five we will discus more random characters that would fit great in the CW. 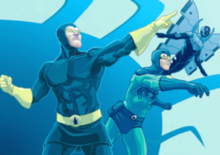 The only reason that Blue Beetle is so low on the list is because we have gotten hints about him since the beginning. It is starting to get annoying that we have had to wait so long and makes us wonder if they ever will introduce the genius or Jaime Reyes either.

Booster Gold has had a cult fan base for a while now, which makes him the perfect candidate for a CW appearance. He is from the future and is a completely failure at everything. That sounds like every CW character ever, so let’s get the gilded loser on the screen already.

There are two versions of the Crimson Avenger. The golden age version was a crime fighting detective. Heck, Quentin Lance could be the Crimson avenger… Actually, that’s not a bad idea.

The other version is Jill Carlyle who is a more street based character. She is closer to being an anti hero than the original Crimson Avenger, but she could have a great appearance in Black Lightning, which will focus on gang violence.

Charles Victor Szasz is an investigative reporter who will do anything for the truth. Sounds familiar? He influenced Rorshach and has a similar personality. They have referenced and even shown Hub city, which is were the Question usually operates, so they already have the set up for him. How cool would it bee to see this conspiracy freak doing detective work with the Green Arrow?

It’s a miracle that they haven’t added Metamorpho, because he is right up their alley. He is a meta human that has his own cult fan base, but is relatively unknown. His powers resemble Mister Fantastic, but he can change his body into different elements. He would make a great addition to Flash, but we could easily see him working with Supergirl.

What do you think? Did we miss anyone?