Last night was an exciting time for DC and Marvel fans alike, with tons of information for future projects revealed. During the DC Universe panel, a teaser trailer for the second season of Titans was released for those of us who went to Comic Con. For those who didn’t, two out of focus screenshots will have to do! Check them out! 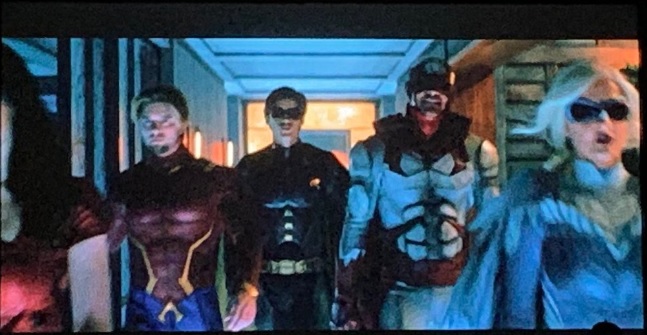 A possible lineup of DC Universe’s original Teen Titans getting together. We’ve got Wonder girl, Aqualad, Robin, Hawk, and Dove. I got to say, I totally dig Aqualad’s suit, even though it is super hard to see any of it clearly…

Why is every first look at a live action Deathstroke always blurry? Anyways, the basic suit he’s wearing looks pretty comics accurate. The only gripe I have with it is the mask/helmet he’s wearing. What’s with the Deadshot-esque light on his right side? Perhaps the reason it doesn’t look right to me is that he shouldn’t be able to see through that eye! Are we gonna see one of the Titans rip into his eye in the second season? That’d be pretty sick!

Along with the teaser trailer, DC Universe announced that the release date will be September 6, so mark your calendars!

What do you guys think of Titans season 2? Are you excited for these new Titans? Deathstroke? Tell us in the comments below! Until next time…