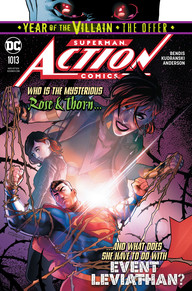 Welcome back! I am back to reviewing my weekly comics again and this week we will be starting with Action Comics #1013 written by Brian Michael Bendis and art by Szymon Kudranski.

So Action Comics has been great. I love what Bendis has been doing because it is a book where he can write about more than just Superman. It’s about Metropolis, it’s about his side characters and it’s about the overall story. I think that this might actually beat out my love for Dan Jurgens’ work.

So in this issue, we are continuing the rise of Leviathan. Superman is still searching for Leviathan and any clues regarding the villain and his mysterious cult. We also get some more information regarding Rose and Thorn, who were reintroduced in the New 52. Bendis has done an incredible job with her character and her other persona that vaguely reminds me of Jessica Jones. I love Bendis’ writing and I honestly don’t know where this story is going even though it is just a tie in for his Event Leviathan. I also thought it was weird having the Offer, which for those that don’t know is an offer that Lex is giving to all of the bad guys, appear twice in this book. It just feels different and strange. I think that it is interesting what is going on with Goode, AKA the Red Mist’s character as she is having trouble dealing with her powers. I am excited to learn about her origin in the next issue.

Overall, it’s a good book even though it’s just a tie-in.