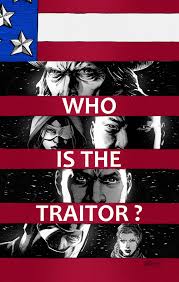 Welcome back! I am back to reviewing my weekly comics again and this week we will be reviewing Freedom Fighters #7 written by Robert Venditti and art by Bruno Redondo.

Freedom Fighters is an interesting book. It takes place on Earth X where the Nazis won the war and America’s heroes lost. Naturally, this book explores several darker concepts, albeit with a teen rating, and it also has this hopeful vibe in which you desire the heroes to win against this unstoppable force. It is strange because this takes place after the majority of the original Freedom Fighters died and these new kids are fighting for America again. The story feels natural, but it still feels a little too fanmade.

In this issue, we catch up with the heroes after their fight with the fake Overman. They realize that Overman is not on Earth and that gives them the chance they need to stop the Nazi rule. The only issue is that Adolf Hitler III has the Human Bomb captured. This is huge because he plans to weaponize the Human Bomb against the Freedom Fighters. We also get a predictable story about a family protecting the Fighters and basically, the father snitches and the family dies at the hands of the Plasstic men. Who else saw that one coming? I like the art it works and the storytelling is interesting. I am excited to see Black Condor take the team back to the dreaded Detroit to steal the Plasstic Man formula. It sounds cool.

Overall, the book was good even though it was predictable.