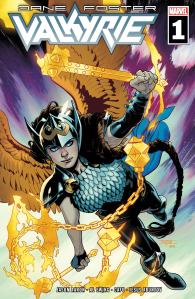 Welcome back! Today we will be reviewing Valkyrie Jane Foster written by Jason Aaron and Al Ewing with art by C Cafu.

War of the Realms was a really great event that was the climax to all that Jason Aaron has been building up to from the start of his initial Thor God of Thunder run. Valkyrie Jane Foster is a spinoff from War of the realms after she gained the powers from the ultimate Thor’s hammer. She now appears to be the valkyrie and is acting as a Thor light character. It’s really cool to see Jane Foster come back after being written off of Thor because of fan outcry.

This was actually a really good book. I really liked War of the Realms, so I really enjoyed reading this story. Jane Foster is a competent character. She doesn’t just want to be a hero, she is still a paramedic because that’s her job. I really liked how Jane talks about how she is one of the few Marvel characters that still carry a secret identity. I thought that the Fast Five was a strange choice for a group of rollerblading villains, but it was really fun reading them. However, the best part of this book is the ending and revealing who actually stole dragonfang the sword of the valkyrie. It’s none other than Bullseye! Oh my god! That’s awesome!

Overall, the book was a great start and I am excited to see more from it!