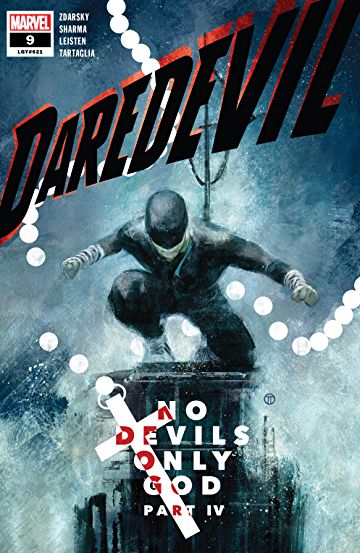 Welcome back. Today, Rek is going to be reviewing Marvel’s Daredevil issue #9, written by Chip Zdarsky and art by Lalit Kumar Sharma. This issue is part 4 of the No Devils Only God story arc.

I’m not sure if I have ever reviewed a Marvel book on our blog until now. The reason is that I’m not a big fan of Marvel, except when it comes to Daredevil. I’m a huge Daredevil fan!

First off, Zdarsky has been doing a great job of keeping up the pace following Soule’s run.  I’m enjoying his story No Devils Only God recently because Matt isn’t exactly Daredevil anymore. It’s interesting to see Matt’s life when he is no longer a vigilante or a DA after his recent accident. His boring normal life provides a kind of anticipation to the readers for these last few parts and I think its lead up to this issue. I won’t spoil it, but Matt is not the person to stand aside when people are in danger.

This issue had a lot in it and I especially liked its opening. There is a small chat between Matt and Mr. Fantastic that provides the reader with some clarity as to why Matt’s been so slow to return to the vigilante life. Despite the display by the Defenders a while back, everyone knew that Matt wasn’t afraid of what they’d do to him if he went off the deep end again. Instead, it has more to do with Matt’s religious beliefs. It’s a very interesting conversation and sells the issue on its own.

The end of the issue is interesting and will have you questioning Matt’s well being. Is he following the will of God? Or has he fallen in with the Devil once more?

I’ve said too much already, but it seriously is a great story and I love what Zdarsky is building up towards. The art is… okay. I don’t hate it, but it’s not my favorite Daredevil artist. I think it’s something with the faces. I’m not sure. What do you guys think?