Welcome back. Today, Rek is going to be reviewing DC’s Nightwing issue #69, written by Dan Jurgens and art by Ronan Cliquet, Travis Moore, and Nick Filardi.

Sorry that I’m late with this comic review, guys. I’ve been sick and have had little time to put my thoughts down into writing. However, I’m here and ready to discuss my favorite character of all time, Nightwing. In case you didn’t read the last issue or my review for it, then check it out here. (Nightwing #68)

So, to get started, I just want to say that I will be doing a basic review with minor spoilers, so I suggest you read the issue first. However, if you are a little uneasy about returning to Nightwing, then hopefully my review might sway you over.

Firstly, Dan Jurgens is slowly returning Nightwing to his old ways after the effects of our last issue. However; the Court of Owls is not letting him go without a fight and still wishes to protect their Gray Son of Gotham. In this issue, there is a lot of inner turmoil in Richard Grayson’s head as he is struggling to discern the truth between the two sets of memories battling inside him. Should Ric trust the Court or the Batfamily? Should he even trust any of his memories? As a reader, we can’t help but yell at him to make up his mind and recover his memories so that we might return to the more pressing story taking place in Bludhaven. So, it’s a bit awkward in that regard and, although I understand the importance of Ric’s struggle, I also have this itching feeling for Dick to get back to Bludhaven and reclaim his past self. Albeit frustrating, Ric does need to go through this process of rediscovering who he is and, as readers, it’s important that we wait and see the full story.

I’m not sure how I felt about the whole ‘Identity Crystal’ thing that is going on since it just seems a bit out of place for the court of owls and an obvious plot device. I kind of wished it was never introduced and DC would let Ric decide his past on his own terms. What do you guys think? Do you like the identity crystal?

Anyways, there is something about this issue that I really wanted to talk about and that was the unique costume which Nightwing wears throughout the issue. I’m not sure if anyone else got Chuck Dixon vibes from it, but it seems to reflect a similarity to Tad’s Nite-Wing costume.

Anyone else think that? Maybe it’s the red in the suit, his combat boots, or the makeshift mask, but it reminds me too much of Tad Ryerstad. Which, if you haven’t read Dixon’s run, I personally don’t care for Tad and found his character more of a nuisance than an antagonist. I’m not sure that I really like this suit…

Aside from all that, the art is still really good and you’ve got to love the scenes of Nightwing swinging through the air and punching bad guys! Just awesome! Thanks Cliquet, Moore, and Filardi! The covers are both great, too. The first one shows Ric trapped within the reflection of a court of owls mask which sets up Ric’s struggle throughout the issue. The variant cover shows a lot of beautiful blues in the Bludhaven cityscape with Ric jumping into action atop his yellow taxi.

My favorite page though had to be this one. It situates Ric between the two sets of memories which are competing for his approval. Check it out!

Before I give my score, I just wanted to leave you guys something… If you read the end of this issue, then you know what’s coming. But for those who haven’t, you might be in for a shock. I give you the cover for Nightwing #70. 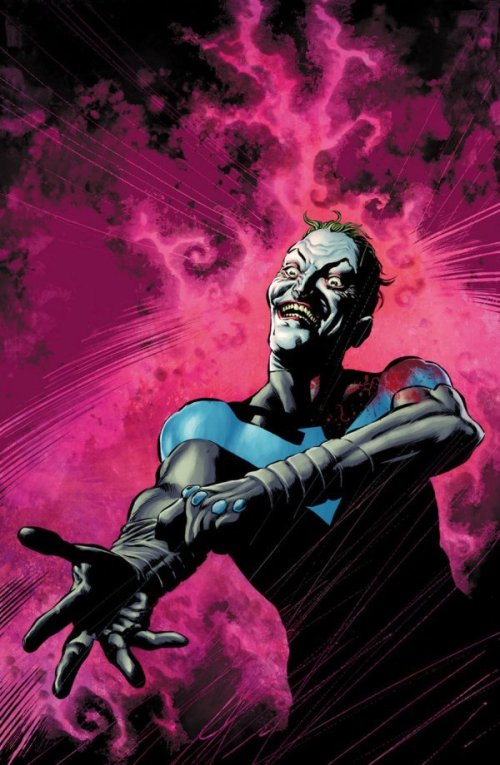 I’m pretty sure that’s the suit that Dick wore when he was shot since it still has his blood and brain on the shoulder. I’m not sure how I feel about Joker getting involved in Nightwing’s story right now since there is so much left to sort out, however; I’m hoping he’s here to kill off the Emergency Services Nightwing impostors. We’ll just have to wait and see…

(How well written is the story? Does it stand up to previous issues?)

I hope you all enjoyed my review and decide to get back into Nightwing.