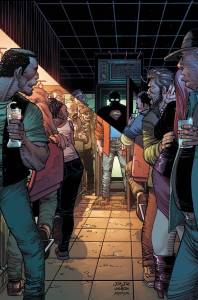 Hey everyone, we’ve got another full comic review for you and today I’ll be reviewing Action Comics #1024. It was written by Brian Michael Bendis and features art by John Romita jr. and Klaus Janson.

Comic Synopsis: The city of Metropolis has been rocked by Luthor’s latest attack and the drama surrounding Superman’s truth, and that gives the invisible mafia a new foothold to change the City of Tomorrow forever. Meanwhile, the Daily Planet is under siege! The fallout from Superman: Villains continues as Clark Kent steps out into the world as a reporter for the first time.

So, what did I think of this comic?

I think that this comic had a few good parts to it. I really enjoy that Bendis is bringing in more members of the “Super Family” with Supergirl being the most recent member to join the team. Now we just need Streaky the Super Cat…

I’m joking, but I wouldn’t be surprised if Mon El would make an appearance because he is in Bendis’ other book, Legion of Superheroes. I also like how Romita Jr. draws the super characters, but I have an issue of not being able to tell the difference between Superman and Superboy/Jonathan Kent. It annoys me when the two of them are having a conversation and I can’t tell who is who. Lastly, I also really like how much Fire Chief Moore’s death affects Superman in the story. The way Bendis captures Clark’s emotions are really good and arguably his strong point.

That’s really all the positive comments I have on the comic. My biggest issue is the same issue that I’ve had for the past twenty issues. I feel like I’ve been reading this invisible mafia story for way too long. I like Leone and I think that she is a really smart character but this story is running a little long for my tastes. Plus, a big issue I have is when there are moments where Leone and her lieutenants break the rules that they set for themselves in this comic. Someone literally says Superman’s name. Or Leone will say Kent and all of these no go words that we know she is really strict about no one saying. Then they are said out loud when the first few comics show that they aren’t allowed too. What bugs me most about this is that they say all of this while Superman and the entire Super Family are using their super vision and hearing to search for THEM. It just seemed like Bendis broke some of his rules that he set up and it was an issue I had with ht storytelling of this issue. I get that they are getting desperate, but that should lead them to getting caught.

In my opinion, I think that it is time for an encounter. Have Superman and his whole family roll up on the Invisible Mafia now. Perhaps they lose the fight but it is enough to stop her plans and Leone goes into hiding for a while. This would allow for some breathing room for the readers and to start a whole new story while leaving Leone’s thread still there for a great comeback.

Overall it was an okay comic, but there needs to be some change soon.