Seppin’s initial opinion: It is one of the greatest “comic book” movies I’ve ever seen. I will explain later why it is a “comic book” movie. It definitely has the feel of a Zack Snyder film which may bother some people, but I enjoy the majority of his movies. That is why I may not be so critical toward it and the way it is filmed,but no matter what, it is a must see for anyone with a comic nostalgia of their childhood. It takes scenes from the Dark Knight Returns and tries to mix it in with the world it created with Man of Steel. It is also more of a Justice League prequel than a Batman versus Superman movie. Overall I really enjoyed it.

The fight scene between the two heroes was amazing.

Rek’s initial opinion: When I went into the theater, I had no expectations. I believe that, due to my open mind, I thoroughly enjoyed this film. The fighting style that Zack Snyder uses in his films are great and the fight in the movie is spectacular. I am extremely excited for Suicide Squad and for Justice League. Now, I understand where other people can become annoyed by Jesse Eisenberg’s, but I personally feel that he did a good job the second time I watched the movie. Other than his performance, I feel that the movie was a great success and suggest any comic book fan to watch this movie.

MSR: I honestly left the theater unable to process what I just saw. It hit me a few hours later that this was a comic book movie and not a comic book movie adaptation. What I mean is that this movie moves like a comic book. Frame to frame. When I saw it the second time, I understood it better and enjoyed it even more. I also think it’s important to note that this is a Batman and Superman origin movie to the start of the Justice League. To me it wasn’t about the fight, but about them coming together.

Ben Affleck was perfect as Batman. I had my hesitations, but he nailed it. I liked everyone, but Jesse Eisenberg. I still am on the fence about him. I wished he was more diabolical and mature. That’s just my opinion.

There are a few things I wish to note. I can see see why critics may not like this movie, but like most Zack Snyder movies, you need to see it a few times before you can form an opinion. I think there were moments of brilliance in this film and I also think there were some editing problems.

Ben Affleck: The Batman that we deserved and that Batman we needed for this movie. He definitely portrayed a great Bruce Wayne, which is something we think is more difficult to play than Batman.

Henry Cavill: He’s a solid Superman.  He did a good take on Clark Kent and you almost felt sorry for Superman and what he had to put up with.

Jesse Eisenberg: We liked his Lex. I think it is different than what people are used to and we appreciate the fact that they tried to do a more memorable, psychotic villain.

Amy Adams: Decent job with Lois Lane, she could use to be a tad more stronger in our opinion.

Gal Gadot: Wow. The Wonder Woman fans in the audience cheered both times we went when she came on screen. She is such a strong character and she fights like an Amazon. Her acting capabilities are still in question since we did not see her deliver many lines, but we are hopeful.

Diane Lane: Great job as Ma Kent. She is a very good actress.

No, seriously, leave now if you don’t want to be ruined.

The Death of Superman. We liked the way they did it. I wish they had done the whole cape thing hung up like a flag, but it was still done well. It was very emotional. We all know that he is going to come back and there was that great little hint at the very end of the dirt rising.

Our question is why didn’t they leave him in the sun for a few days???? Pretty sure Bruce will figure it out.

This is what we can make out from what we heard and saw. It may be wrong, but we think it’s fairly close.

Bruuuucceee! Listen to me now.

Find her soon. Too soon. Am I too soon?

Fear him. Find her Bruce. You have to find us.

Alright so what is he talking about? This could be a reference to Final Crisis, but we do not know at this time. Obviously the Flash feels it is important to warn Bruce. We want to take note of what he says last. Find us. We have already heard this weekend from Zack Snyder that Bruce is the one who will go and recruit the Justice League members.

The Flash: We see Barry Allen on a surveillance camera, chilling out, buying some milk and then some idiot comes in to rob the convenience store. You can barely see him as he foils the robbery…it’s so quick. There was a lot of lightening too, which was cool.

Aquaman: Our first look at Aquaman! We liked his glowing eyes as he comes toward the camera. It was very short, but they way he zoomed off through the water was cool. Our father PSR is the only huge Aquaman fan in the world and he was excited about two things. Aquaman and Wonder Woman.

Cyborg: This was the longest cameo and our favorite. It shows Cyborg’s origin and also we see a glimpse of Dr.Pepper…just kidding, but we do see the mother box.

So what is the mother box?

It is an invention by the new Gods and the old Gods. It creates boom tubes, which is  a way to teleport quicker and it also has all the information pertaining to the universe.

We’re going to jump to the end when Batman pays Lex Luther a visit in jail. He starts to sing a little song, ‘Ding, ding, ding,’ that is the sound that a mother box makes and he is also telling Bruce that he is coming. He has heard the dings. This makes Cyborg very important. 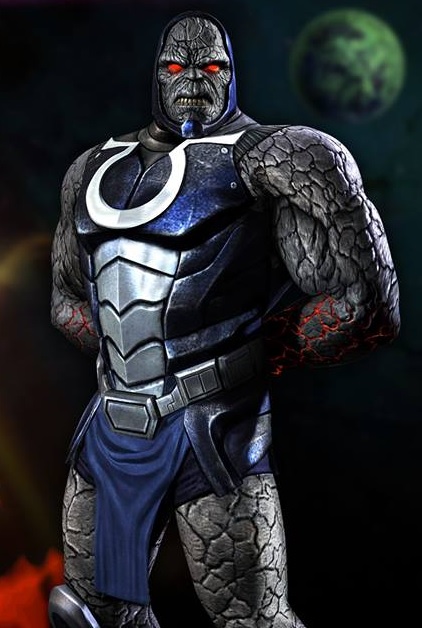 Darkseid: We saw the omega symbol and the parademons in the trailer so we knew he was likely to be referenced. Darkseid is the big bad. He is one, if not the, biggest villains in the DC Universe.

Darkseid is a evil dictator and the leader of the old Gods of Apocalypse. He is a Hitler like character who wants to find the anti-life equation to kill the new Gods and enslave the whole universe.

MSR: I want to say something about the Batman/ Superman fight. A lot of critics are saying that it was unrealistic and stupid that Bruce stopped himself from killing Superman when he heard Martha’s name. Clark does not want to fight him and he goes to seek help from Batman because Lex kidnapped his mother, who coincidentally has the same name. They fight, but just when Batman is about to kill him with the kryptonite spear, Superman pleads with him to find Martha and save her. Bruce is caught off guard when he hears his mother name and it was a touching scene.

As a mother, I completely got it, and I thought it was great. I think at that moment it was the only thing that could stop Bruce from killing Superman.

I also want to try and express how I felt seeing Wonder Woman save Batman. It was the biggest moment of the movie for me and my daughter. We cheered and I had tears in my eyes seeing our first real live woman superhero on screen. Yes, Black Widow is in the Avengers, but she’s not a superhero, she’s a spy. Wonder Woman is an Amazonian Warrior and I was bursting with pride and delight.

Agent 37? Seppin swears he saw Agent 37 on the monitor when Bruce is in the Batwing, talking to Alfred, trying to get to Doomsday to follow him. It’s the last line on the monitor. I will double check when we see it in Imax this week.

The biggest gripe Seppin had with this movie…

Seppin: Drone Pilot? Where was my Drone Pilot? We better get to see him in the extended version. I know it’s you Hal. I know you’re out there waiting to be discovered by me. We’ll find your ring.

Part One: Assembling the Justice league.

That’s it in a nutshell.

Comments? We’re sure there will be some that will disagree with us, but remember this is just our opinion.