We want to start off this blog post by saying that we have not seen Batman v Superman. We are going tomorrow at 6;00 pm and we are also seeing it Friday morning. Our review will be posted this weekend.

Normally, we don’t like talking about a movie we haven’t seen, but we felt this post must be written because it is not about the content of the movie itself, but the firestorm that has erupted.

This past weekend, the first screenings of Batman v Superman took place, and the response was overwhelming positive from fans. A large majority of sites that reported the reaction almost always ended with a ‘take this with a grain of salt until REAL critics see the movie’. That puzzled us, but we overlooked the warning because we were really starting to feel the excitement generated by true fans.

Tuesday morning arrived and another wave of reaction videos and reviews also started to pop up from popular YouTube podcast shows and bloggers. Again, the consensus was that this was a good movie and everyone seemed pretty excited, and blown away.

However, at 6:00 pm when the embargo lifted on reviews for ‘professional’ critics, the internet blew up and what we witnessed was unlike any other we had ever seen.

The first reviews were mostly from critics that bashed this film from start to finish. Then a few more came in from well-known reputable sites and they praised the film. That led to another onslaught of bad reviews and that’s when we noticed something. Back and forth on Twitter it went something like this:

“This movie is a beautiful disaster.”

“Batman v Superman is a triumph.”

“It’s a mess from start to finish.”

“This movie is going to lead to great things.”

“Comic book fans unite. This is the greatest comic book movie ever.”

Are you scratching your head yet? We definitely did and that led to an in-depth discussion on what was going on. How could so many fans be way off in their reviews? Were the fans trying to overlook the bad? Were we being bamboozled by the fans?

Or has it the prejudice that has existed since day one against this movie reared its ugly head?

Our favorite reviews were the ones who started with, ‘This movie is no fun’, ‘It’s too dark’, and the best was when they started off the review mentioning Marvel and using them as a comparison.

Journalism at its finest. 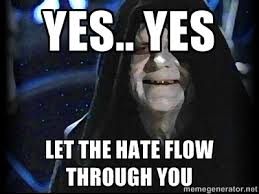 Anyone who denies that there has been a smear campaign is living in a fantasy land. A recent report showing the massive hate tweets from Twitter bots really brought things into perspective.

If you don’t believe us, type in Batman  Superman Rain in your Twitter search bar.

We think there is a multi layered explanation for all of this and while you may be shouting at your screen that we haven’t seen the movie yet so how could we make this assumption, bear with us for a minute.

The first thing we need to address is that Zack Snyder is a controversial director. Fans love him, but critics hate him. You only need to see the first reviews for Watchmen, 300, and Sucker Punch to confirm that statement. His take on Man of Steel was also mixed, but here is an interesting fact thing about Snyder.

His movies, which are usually trashed upon at first, are regarded later as brilliant. His visual style is always applauded, but it’s usually the story telling aspect of a film which gets him into trouble. We here at SeppinRek call it ‘The Zack Snyder Curse’ and it definitely worried us when he was announced to direct this film. We knew he would do a good job, but we were uneasy about how others may rush to judgment because of his track record.

Zack Snyder is a comic book fan and we know that to direct these movies, you have to be otherwise, you will never fully understand the mindset of what a fanboy or fangirl expects to see. We want to see our comic book characters come out of the pages and onto the screen in glorious fashion. We don’t want a generic version that the studio forces you to make. Zack Snyder gets that and he fights for his vision. He’s not perfect. He has flaws which we pointed out, but to go into Batman v Superman and say before you even sat down that you knew you wouldn’t like the film is unprofessional and biased.

Next we want to bring up another aspect that seems to be lost in this controversy.

A favorite YouTube pod caster of ours mentioned something interesting in his review. He made a valid point that critics seem to want comic book movies to fade away and never to return. We’re not sure what they want to replace with this genre. The only thing coming out of Hollywood lately has been disastrous reboots (Robocop anyone?) and boring ‘thought provoking’ dramas that make you want to slit your wrists when you leave the theater.

Creed , The Martian, and Mad Max: Beyond Fury Road are the few exceptions as of late.

Now, let’s address the elephant in the room. The large elephant that is looming over this entire movie and that is Disney/Marvel.

We want to say that any critic who has given Hulk, Iron Man 3, X-Men Origins, Thor 2, or Age of Ultron a 9 out of 10 should be banned from reviewing this movie. Those movies were not good comic book movies and if you thought they were then…wow. I’m sure there can be an argument for Age of Ultron by the most passionate Marvel fans, but if it didn’t bother you that they essentially rewrote the story and Ultron as a character then you might want to stop reading.

Disney and Marvel are cinematic powerhouses right now. Have they done a good job on some of their movies? Absolutely. But are they starting to lose steam as one movie blurs into another? Yes. Cap 2 and Guardians of Galaxy saved them after the debacle that was Thor 2 and Iron Man 3, but seeing how they are once again changing comic book canon to please the masses in Civil War, we are starting to get annoyed.

Before you start thinking we are hating on Marvel, just know that we are comic book fans. We enjoy both DC and Marvel equally, but we are also aware that some do not and yes we are speaking to you Marvel fanboys who are the absolute worse. The smear campaign against Batman v Superman by you has included some of the most vile comments we have ever read.

The reviews are befuddling. Never have we seen such a divisive reaction and the thorough disconnect from fans and critics are at an all-time high. It actually brings to mind the controversy over Star Wars: A New Hope and Empire Strikes Back. Critics hated it. Actually some of them still do, but fans loved it and the following is stronger than ever today.

We can’t say that we are going to love this film. We might find faults with it as well, but we are going into it with an open mind because we listen to fans, not critics. If you do want to find good reviews by professional critics you can check out the ones posted by small sites like Rolling Stone magazine, USA Today, People magazine, Forbes, Heroic Hollywood, and Comicbook.com.

You know, the small guys…wink.

But if you want to read biased, hate filled reviewers who just want you to click on their link because every time you do you line their pockets, go right ahead. It hasn’t changed our level of excitement and the only thing we have noticed is that the DC Comic fans have now banded together like a small army.

We want to give full props to those that are confronting these critics with intelligent comments and finding old reviews of truly awful movies that they have praised, and posting them in the comment section. It’s about time people who are posing as professional journalists and movie critics get a little payback for their narrowmindness bigotry towards DC, Snyder, and Warner Brothers. We do not think, however, that fans should be engaging in foul mouthed rants. This does absolutely no good and it only makes DC fans look idiotic.

It’s also interesting to note that while Batman v Superman has a low Rotten Tomatoes score as of right now it is still standing at a 98% ratio for people wanting to see this movie. Fandango is also reporting that the movie has set a record on it’s site for presale tickets and it is has been sitting at the #1 spot for weeks on Movietickets. com with over 61% of tickets being sold are for Batman v Superman.

So what does this all mean? Well, we can sum it up in one meme. Forgive the swear word, but it’s just how we feel right now.