Raise your hand if you really did not think we would be getting a trailer Saturday for Justice League?

Check it out below and then we’ll get to our shot by shot analysis.

The townsfolk of Amnesty Bay, Maine are being questioned about a so-called “Aquaman”.

Everyone clearly knows who Bruce is talking about. He brings fish to the village in the winter and last night he came on the King tide.

This is interesting since it’s obviously taking place during the medieval ages.

A Mother Box is being buried.

A king is watching over the burial of said Mother Box. We know that there are three mother boxes. We saw Steppenwolf in the deleted communion scene from BvS. Rumor has it, one was given to the Atlantians, one to the Amazonians, and one to the humans to hide and protect from Apokolips (Darkseid) ever getting his hands on them again.

We are assuming that this is the Flash’s headquarters and it looks awesome. Like a dumpster diving nerd built his own Bat-Cave.

We get a better look at Jason Momoa when he is in disguise.

Having a a drink before his swim, jeez this guy is like a bodybuilder.

Walking into the waves like a Boss. Epic shot.

Jason Momoa just tossed Bruce into a wall which is funny since he’s Batman.

Bruce is trying so hard to not wail on this guy, but he needs Aquaman on his team.

Seppin’s personal favorite part because it shows that there will be more humor in this movie.

This scene’s script was leaked and we read this a few weeks ago, but it was so cool to see it actually unfold on screen.

Ezra Miller’s original Flash suit, don’t know if it will get upgraded though.

Bruce testing to see what this guy is all about. The Batarang could clearly have stuck itself in Barry’s shoulder if it wasn’t for his speed.

Wow, Zack Snyder has made the Speed Force look so cool in BvS and even now in Justice League. We love the Lightning and the frozen scene going on while Barry is moving.

Is that a Bat?

Oh sh*t is Bruce Wayne Batman? What do I do, What do I say?

We like how Ezra Miller is being more of an anti social Flash that needs friends and he needs people to help him out because Central City is almost as crazy as Gotham, (Gorillas, Boomerangs, mirrors, and Speedsters to name a few).

Ray Fisher, maybe this is before he had the accident or maybe he is in a computer. It’s cool that he is wearing his jersey. Victory!

We see four of the SEVEN members gathered together.

Finally a great look at Cyborg, and it is picture perfect. Like super accurate with his suit in the comics which is nice to see.

Oh that is such a Batman thing to say. It’s great to see him as still a dark character, but have a lighter tone like he is in the Justice League comics.

Our first good look at Ezra Miller’s Flash and we really like his suit. It is more realistic with the armor plating protecting him from the Speed Force and anything else. How come every Speedster has to have fingerless gloves though?

Sorry, but we wanted to just show the lightning pop out as he makes cover from an odd laser blast that we have no clue where it came from.

Batman in a dark hole, nothing suspicious. Could he be going into a tunnel looking for the rumored parademons that have invaded Gotham?

That awesome cross bracers protecting her.

“Arthur Curry, so I hear you can talk to fish?” And you wonder why Batman lost his Robins and Alfred makes sarcastic comments towards him. Jason Momoa could easily toss him out of the pub, but then he would have to deal with the Bat. They made Aquaman so badass in this universe that you can’t help but laugh when you remember the early versions of the character.

We love Ezra Miller, Ray Fisher, and Jason Momao. Why you ask? 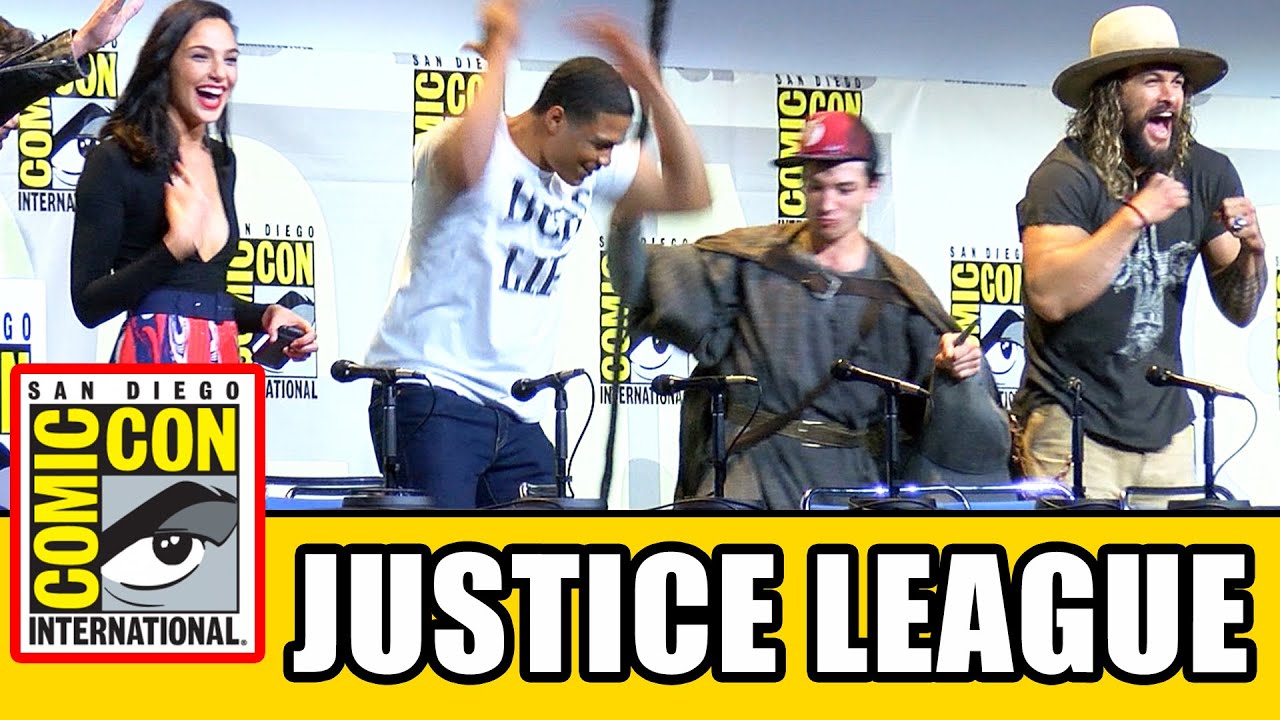 Ezra Miller came to the panel dressed as Gandalf. Ray Fisher was jumping up and down with a Flash hat in his back pocket, and Jason Momoa is just plain awesome.

Again, thank you Zack Snyder for giving us this treat. We really only thought we would see a photo and the cast assembled on stage. This footage looks great so far and we are now more excited than ever to finally see the Justice League come to life on the big screen.

You gotta get a Green Lantern though, just saying…