I probably don’t even have to say that because everyone else seems to think so as well. With an average review of an 87-93% on major gaming news sources, I shouldn’t have to tell you that this is a great game. However I do want to write a review for people who have never tried a final fantasy game before and for gamers that don’t know anything about Final Fantasy because I was one of you. A month ago I had no real interest in playing Final Fantasy. I just thought that it was a little too daunting because there are so many games in the franchise and because of the large story I’ve always heard about. I never thought that I could get into the franchise or into any of the games because I wouldn’t know what was going on. And then E3 happened last year and I actually began to notice this game because it looked stunning, plus the characters and the world peaked my interest. This is why I think that I bring an interesting perspective in this review versus other gaming news outlets that have followed the franchise and have played the original game. I represent the new fans and I think that there is a lot of potential for new players to hop onto this game. I believe that this is an incredible game.

Firstly, I want to bring something up to those hardcore players. This is the only one that I have ever played and I never played the original FF7, so please try to look past how I might not know how the original game went. Plus, i have nearly forty hours into this game, so I think that I am definitely allowed to review it and put my perspective onto this game.

So, onto the review, and be warned. There will be spoilers past this point. IF you don’t want to read after here, then know that I give this game an easy 9.9/10 as my final score.

Okay, so let’s first talk about the games story and the world around the game.

In FF7’s remake we play as Cloud Strife, an ex-soldier of Shinra. Shinra is a global conglomerate that rule the planet basically. Cloud is helping an old friend, Tifa Lockheart and the rebel group known as Avalanche that are trying to take down Shinra. They are trying to take down Shinra because the evil company is using the planet’s life force to power their city and machines. In the game, you work to stop Shinra with the help of your friends and discover more about Cloud’s past. An evil man, known as Sephiroth is torturing Cloud and brings up horrible memories. He seems to be bent on ruing the planet and you must stop him. And the game ends after stopping Sephiroth, but he still manages to get away which leads up to the sequel.

And then put this all into a steam punk fantasy world and you have yourself the FF7 Remake story in a nutshell. But there is still so much more that I can’t go into for the sake of the length of this review. The story is huge, but it doesn’t feel that way once you have dropped yourself into the world. Its very easy to get immersed in and to follow because you love the characters…

And let’s talk about the characters because this might be my favorite part of the game. Each character in the whole game is so unique and placed so well that you get to know them. Even the side characters feel important because you’ve become apart of their world.

I have never felt so attached to a group of characters like Avalanche. This group of rebels are just the perfect family in a video game ever. Playing as Cloud, you get to care for every member of the team and you even get the feeling of being accepted as one of them at points. It such a unique feeling that no other game has ever truly made me feel. So, let’s talk about our main star, Cloud Strife. 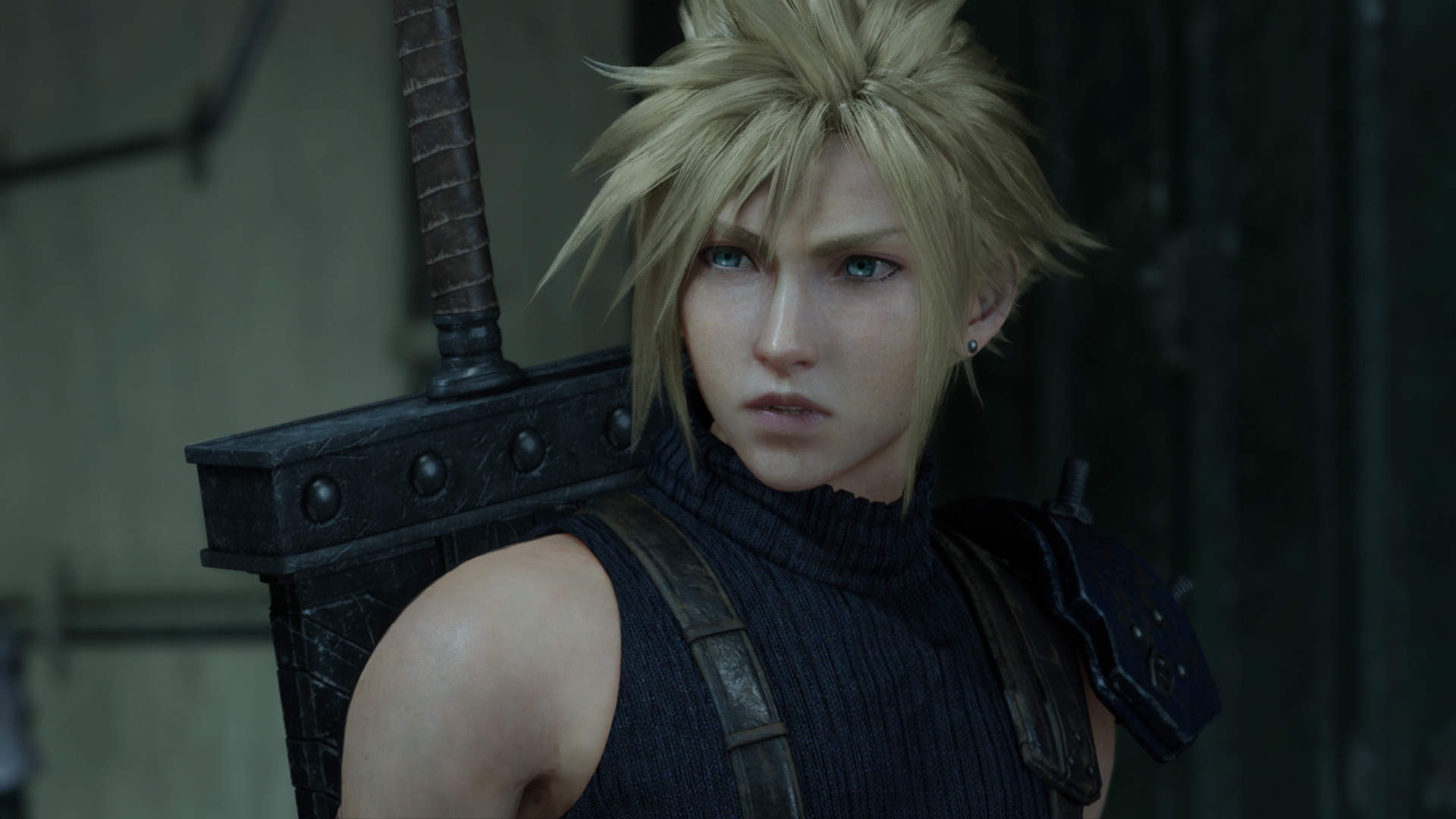 Cloud is an awesome protagonist. He is quiet, but a total bad ass. Plus, he carries around the Buster Blade, the big sword, which cements him as one of the coolest characters in gaming!

A story element that really makes me connect to Cloud is how lost he feels. I think that a lot of people can relate to this at some point in their lives and it fits well with Cloud as he is just a mercenary trying to get by. However, I love how Avalanche is slowly trying to get him to warm up, it feels just like the group of friends that you make in your life and its very welcome in this game.

The last part of Cloud that I want to talk about is his memory loss. I feel like this was a major risk to take because it would be hard for audiences to understand the main character if he is having trouble learning who he is and what happened to him. But it does the complete opposite. Cloud’s memories serve as some of the darkest and most interesting pieces of the game as we, the gamer, try to piece together who Cloud really is and at the end of the game we don’t fully have and ending, but it will surely be explored in the next one.

Overall, Cloud is an awesome protagonist that sets up for a really amazing game.

Tifa Lockheart is also such a great character. She knew Cloud when they were kids, but lost track of him when he went to go be a soldier. She’s grown up and had a daughter with Barret, the leader of the sector 7 Avalanche sect. Although I think that Barret has a bigger connection to Marleene, their daughter, but I think that she still really influences Tifa at points. She’s usually the first to question whether what they are doing is right? And I think that this comes from her wanting a better world for her daughter and to have a healthy planet for her daughter to live on. Her perspective is usually shot down, but it makes the gamer question if you are in the right when you are blowing up reactors or making decisions against Shinra.

I like this a lot because it makes her more complex than the other Avalanche characters because she questions what is right. I also love her interactions with Cloud because they often talk about this subject and it’s different when it is just them because he isn’t apart of Avalanche and Cloud’s view is different because he has seen the upper city’s industrialization and the benefits of using the planet’s life force, Mako, do better lives.

Plus, she is a fighter. I am not joking when I say that I only one the last fight because Tifa beat the crap out of Sephiroth with a starshower move. Shes a bad ass in her own right.

Barret is my dude! If Tifa and Cloud are badasses, then Barret breaks the scale. He’s the leader of the Avalanche sect. and he has really cool sunglasses. Oh, I almost forgot to mention that he has a huge machine gun for an arm!

Yes, he is so cool because of this and it instantly makes him one of the most likable characters. But I also think that Barret is a really deep character too. There are tons of scenes where he will just go off talking about how the planet needs us and condemns Shinra for killing the planet. He has a bit of Jules from Pulp Fiction in him as he quotes pieces of religious texts. I think that Barret’s connection and devotion to saving the planet is really interesting and I would love to see more of that from him in a sequel.

Aerith is the last character I will be talking about because she is really important. She started off as just another person that Cloud had befriended, but the story gets way more interesting once we learn that her mother was one of the ancients. The ancients were a group of people that lived on the planet before Shinra and the modern age. They cared about the planet and lived peacefully until their time ended. Aerith is constantly being attacked by Shinra because they wish to capture her to experiment on her like they did her mother.

Aerith adds a warm and interesting perspective in the group because she isn’t a member of Avalanche. She is a regular member of the world and the society. She’s a friend to everyone in the slums. She’s really fun and brings life to Cloud. She’s awesome.

Lastly, I think that the gameplay is really great in this game. It is super smooth and combines real time combat with strategy effortlessly. I love how you are able to cast spells and preform abilities in the middle of combat. In fact I think this is something that could only be improved upon in the sequel. I think that more abilities and more combat customization should be the route that the developers take in the sequel. Specifically, one of the abilities in the game allows you to summon a monster ally of your choice that comes with their own abilities, I think that there should be more of these summons with more special requirements to earn them. Overall, the combat is fun smooth and makes the game so immersive. Overall, I was stunned by Final Fantasy 7’s remake. It was breathtakingly beautiful when it comes to gameplay and story. The pace of the story was great and the characters were drawn out to such an extent that I found myself really caring for them. All of the allies I made in the game felt like actual friends by the end of the game, which was sad because I’ve started to miss them ever since I beat the game. I am excited to see a sequel because there is so much more to the story of Final Fantasy 7 and I think that Part 2 will be nothing less than spectacular. The game play is fun and addicting. This leads me to say that Final Fantasy 7 Remake might end up being my favorite game  of 2020 and to a further extent my favorite game of all time!

I know that some people have issues with the game only being a piece of the original FF7, but they should know that this game is less a remake and more of a re-imagining of the original game. Everything is drawn out more and every character has been given a proper life. I think that this is a game that everyone should give a chance because without a doubt they will find themselves immersed into one of the most impressive games to be created.