Seppin is back for his analysis of The Batman teaser trailer!

We, like many others, over 22 million at last count, have watched the teaser trailer for Matt Reeves’ The Batman several times. Okay, Seppin has watched it more…like, a lot more. Who better to dive deep into the trailer than our Batman aficionado?

The crazy thing about this teaser trailer is only 25-30% of the movie is filmed. Let that sink in.

Alright. Let Seppin do his thing.

Awesome start to the trailer. It appears that our “Riddler” character is taping up his recent murder victim. Fans have been able to theorize that this is Gotham’s mayor. Perhaps Matt Reeves is going to be doing a story about the Riddler taking on corrupt officials like Falcone.

What a hero shot. The mask is interesting and clearly shows that Matt Reeves is taking some liberties with his Riddler design. We love it! The anarchist and modern murderer is a cool way to take the Riddler.

Oh Spooky. Again, we believe this is Gotham’s mayor because of a scene later on in the trailer where Bruce is at his funeral.

This is an interesting shot. There appears to be a slew of newspapers lining a wall or window. The headlines are talking about multiple people, such as the mayor of Gotham being re-elected and the Don. Which we can infer is Falcone. The Red “Lies” show that there is some beef here and points toward this Riddler aiming at corrupted officials and families. 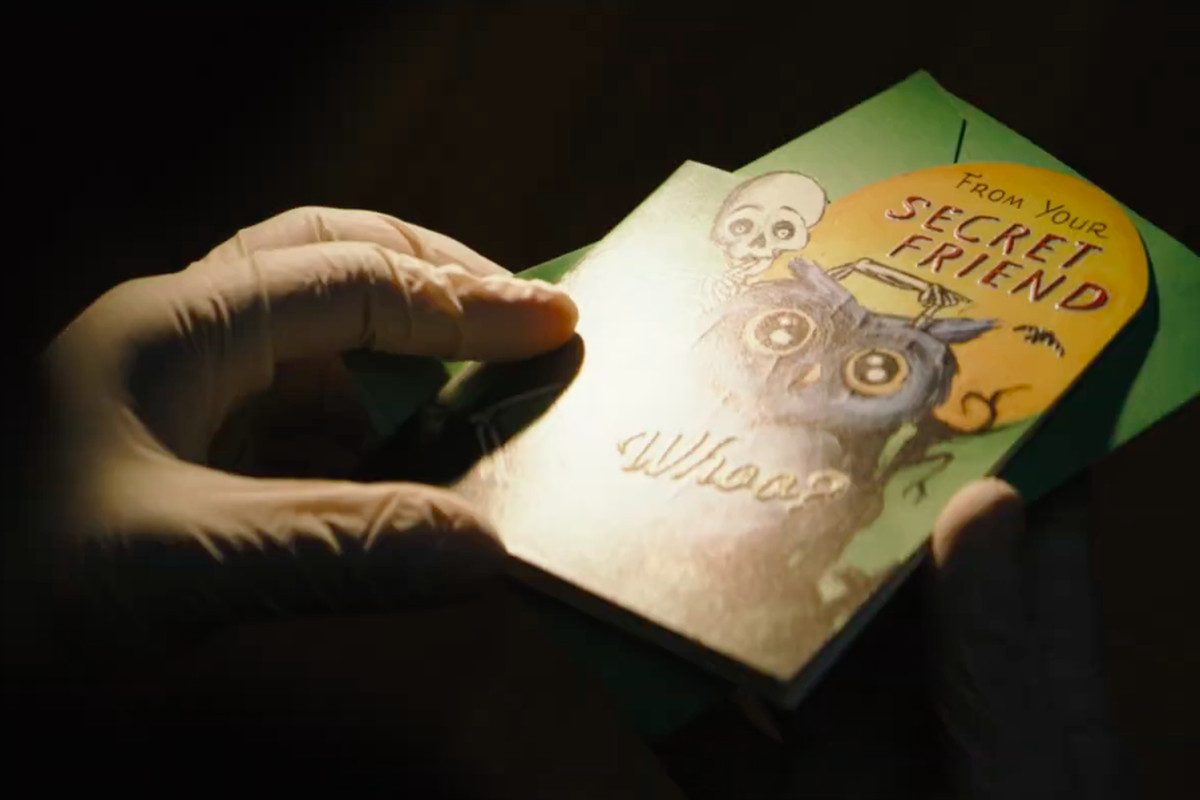 This is an interesting note to leave behind, especially for the Riddler. Ironically it is giving us some Batman Forever vibes.

BUT, there is another message here that has been staring us in the face since the trailer dropped. It may be nothing, but the owl on the cover as well as the message about a “secret friend” should unnerve comic book fans because it points towards the Court of Owls. An underground Illuminate running Gotham under Batman’s noes. Perhaps the Riddler is apart of them, or he is just the poor sap they are using to get at the Batman.

“Haven’t a clue? Let’s play a game. Just me and you.” Some people are saying the symbols spell out The Batman. But funny enough you could also argue that the count of symbols perfectly lines up to Edward Nygma. However, the issue with this theory is that he is going by Edward Nash in the film.

“What does a liar do when they’re dead?”

Lie still. That’s the answer to the riddle. #World’sGreatestDetective

There is a slight glare, but we know that it is saying “Maroni Drug Bust” which is cool because Maroni is the other side of the Mafia in Gotham. Potentially we will see the Batman take down Maroni too?

Holy Hell of a Batsuit! It looks amazing for this film. The symbol almost reminds us of the Arkham games because of the armored look to this Batman.

Also we love how Batman is working with the police, even if they still aren’t used to seeing Gotham’s Dark Knight walking amongst them at a crime scene. It feels like the first Batman story in which Joker is murdering important officials and Batman has to work with the police to stop them. We wouldn’t be surprised if Matt Reeves was going with something similar because he is a fan of the golden age comics.

This seems to be the current police commissioner because we know that Gordon hasn’t reached that state of his career yet.

You may not like the grease paint, but every Batman has worn it. Pattinson is just the only one that will show it on camera.

This is really cool. It appears to be the Batcave or what currently is the Batcave. It seems almost like an abandoned train station, which would be good for Batman so that he could us the tunnels underneath Gotham to traverse the city faster.

We can’t really get a good look at the tech that he has, but it’s pretty clear that this isn’t the most high tech Batcave.

So, here is the shot that we mentioned earlier. This funeral seems to be for the man that died at the beginning of the trailer. We assume that he is the mayor because of the newspapers and because of the huge crowd.

This is already a very different Batman movie. The RIddler getting his message to Batman is really cool and dark. We love it!

(And to all those people complaining about a dark Batman movie, remember that the Dark Knight is one of the best Batman movies ever and that was crazy dark. Plus you could always go watch the lego Batman movie if you want a lighter Batman movie)

This is Bruce Wayne. Not the one that everyone always seems to think he is but the early years when Bruce was becoming Batman. He didn’t have that mask of billionaire playboy, he didn’t think that he needed it at the time. He was a brooding Batman in and out of the cowl. Love the hair by the way. That’s a damn good Bruce Wayne!

Oh shit, Selina Kyle is breaking into a safe. Perfect.

Also, we really like how her and Riddler don’t really have these crazy costumes and identities yet. That shouldn’t come around until Batman is a proper force of Gotham. Or until the crazy starts to show up…

Plus this fight is going to be fun. You gotta always enjoy Batman and Catwoman’s antics.

Why, that is none other than Colin Farrell as Oswald Cobblepot, also known as the Penguin. This is nuts because he is almost unrecognizable, but he looks the part. Oscar for best make-up just by the few shots we got of him!

Oh shit, who brought in the clowns?

That’s Peter Sarsgaard under a whole bunch of clown make up by the way. So the Joker must already exist. Perhaps he was the Batman’s first case?

This is cool because the world of Gotham is already built and ready for some interesting storytelling. We don’t have to wait three movies for Gotham to be filled with masked criminals. We’ve already got them. This is a cool thing to do because they can go anywhere after this movie.

Damn, the Batman is here.

What a perfect line to bring into this movie. It is incredibly iconic and helps solidify Pattinson as the Batman. Also, what a fight, or more like a beat down. The fighting looks so clean and we are excited to see more of it.

First real look at the Batmobile in action and it is stunning. We love that they are bringing back the silly flame at the back of the car that makes it go faster because comics..

That is a sexy car!

Haha, we already are in love with Oz. He seems really fun and the perfect scumbag for Batman to beat on!

This is interesting. It looks like Batman and the police aren’t necessarily getting along. Gordon rushes in to help, but it seems that the police are not all into the Batman craze. Perhaps they are worried because they know their corrupt police department is in for an overhaul.

What is Batman doing here in general? Is there a corrupt cop? Did another interrogation room scene go wrong?

More Batman against the cops. This is a great shot of him using his grappling hook to zip up past the stairs.

Is he on the run?

We have tried, but it is hard to tell who exactly is on those computer screens. It definitely looks like a man, but who?

We think that this ominous dialogue is hinting that there is something not quite right with Batman’s  or should we say with Bruce Wayne’s family history. Perhaps his parents were corrupt. This wouldn’t be the first story to do so because the telltale series and even the Joker film pointed the narrative in that direction. How cool would it be if that were the case and Batman’s whole vow and story were flipped because of it. It would certainly make Robert Pattinson’s Batman a unique version of the caped crusader.

Damn, what an ending shot! We love the way Pattinson looks. We can’t even see him at this point. Right now, he IS Batman.

Overall, this was a fantastic trailer with tons of little tid bits that are leading into a grand mystery that may relate to Batman’s past. The inclusion of so many rogues is such a different thing to do for a comic book movie because most just stick to one or two. We love this because it really cements the world and follows Batman’s life as he has to deal with these nut jobs all the time. This is a movie that we will for sure be checking out.

We would also like to point out the views this trailer already has and the views for reaction videos are off the chart. We were checking some out and the emotion this trailer brought out in fans is, well, unlike anything we have seen before. Is it because of so long in quarantine or is it because we all know something special is clearly heading our way with this take of the Batman? Whatever it is, we here at SeppinRek were not expecting this teaser trailer or what we would see. Matt Reeves has so far exceeded our already high expectations!

What did you think? Spot anything we missed?