There are have been a slew of rumors floating around this weekend and we thought we would break down each one. Casting rumors are tricky to report because one day it seems like someone is all set to play a character and the next day, poof, you never hear about them again.

So, take everything with a grain of salt for the moment.

Thursday we did a special edition top five on characters we think William Dafoe may be playing in the Justice League Part One and Justice League Part Two. One name we did not post was actually a character that Rek mentioned, but in the end, we felt it was too much of a stretch.

Well according to rumors, fate may have intervened, and Rek might actually be right.

Who is Kent Nelson a.k.a. Doctor Fate?

Kent Nelson is Doctor Fate, a powerful sorcerer and agent for the Lords Of Order who fights evil alongside his wife Inza. His amulet,cloak, and helmet are creations of the ancient Nabu who acts as his mentor and spiritual guide. He is a founding member of the Justice League Society of America and he was part of the league when they faced Darkseid.

This is purely speculation right now and has not been confirmed, but it does make sense. How awesome would it be to see Doctor Fate onscreen for the first time?

Moviegoers got their first taste of Ezra Miller’s Barry Allen in Batman v Superman: Dawn of Justice, and he’ll team up with his fellow DC heroes in Justice League: Part One next year. Following that, he’ll lead his own movie, and now we may know who will make up his supporting cast.

With casting reportedly underway on The Flash, Heroic Hollywood has apparently obtained a breakdown of the information that’s been sent to talent agencies regarding the five main supporting roles. It remains to be confirmed whether these characters will actually appear in the movie or if this breakdown refers simply to “types,” but given Flash’s mythology, seeing these folks appear wouldn’t be the least bit surprising.

First up, we have Iris West, Barry Allen’s main love interest. Just like her comic book counterpart, The Flash’s Iris is a reporter for the Central City Citizen, and she’s described as having “Christiane Amanpour’s brains and Carrie Bradshaw’s style.” The article also mentions that Iris is the only supporting character who’s currently being tested for, so unlike the other characters, it’s basically guaranteed she’ll be in the movie.

Next, we have Eobard Thawne, better known as the Reverse-Flash and Professor Zoom, Barry Allen’s greatest speedster enemy. His movie version is described as the “smartest man in the room,” earning him the nickname “Central City’s Bill Gates.” He also suffers from an advanced degenerative disease, which has left him confined to a wheelchair.

The third character is Fred Chyre, who in the comics was a Keystone City police officer who worked with the Wally West Flash. In The Flash movie, he’s a “gruff” detective who meets Barry Allen at a crime scene. Now they’re colleagues and the “closest thing Barry has to a friend.” He’ll be investigating an unusual death at Thawne Laboratories.

Fourth is Leonard Snart, better known as Captain Cold. An ex-military man, he’ll be working for Eobard Thane in The Flash movie. The piece speculates he’ll be the muscle, similar to Callan Mulvey’s Anatoli Knyazev in Batman v Superman: Dawn of Justice. Considering that Captain Cold has been one of Flash’s biggest enemies for decades, this feels like a major demotion.

Finally, we have Jay Garrick, the Golden Age Flash who was debuted in the comics 16 years before Barry Allen. In the movie, he is a former Central City professor who was fired for “fringe science,” specifically working on the Speed Force program. He’s only set for a cameo, so don’t expect him to start speeding around with that trademark helmet.

Again, we want to stress that none of this has been confirmed, but it’s interesting because except for Chyre, it sounds an awful lot like The Flash t.v. show.

While most of the new Justice League made at least cameo appearances in Batman v Superman: Dawn of Justice the one character that was noticeable absent was Green Lantern. The character has been a core member of the Justice League throughout its various incarnations and many believed that at least one version of the character, either the best known Hal Jordan, or possibly John Stewart, who was used in the Justice League animated series, would be cast soon.

However, according to Latino Review, when they went digging around for details on which version we would see, what they learned was that current plans for 2020’s Green Lantern Corps film don’t only include the Jordan and Stewart characters, but also a third Lantern from the comics: Kyle Rayner. 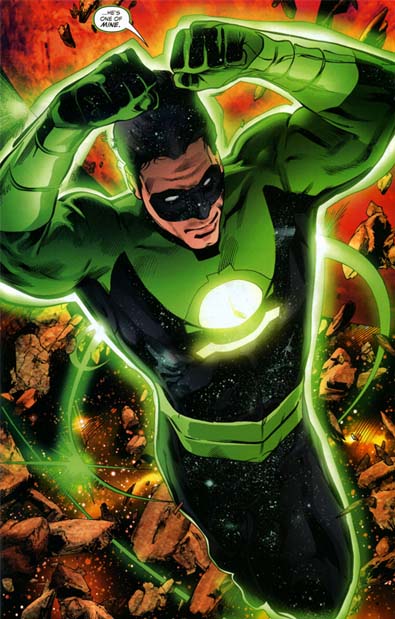 In the comics, Kyle Rayner is the young man who replaces Hal Jordan as Green Lantern when the traditional hero goes bad, in what is still one of the most controversial comic book stories ever written. It appears that in the cinematic version the two may be existing concurrently. Apparently, the plan is for Hal Jordan to play an older Lantern, in the age range of somebody like Matt Damon, while John Stewart and Kyle Rayner would both be younger characters.

A number of actors have very publicly been throwing their hat in the ring to try and get a shot at Green Lantern. Most publicly Tyrese Gibson has made it clear he wants the job. As recently as a month ago the actor said he’d been in touch with Warner Brothers about the role, though no decision had apparently been made.

We also want to point something out. In Batman v Superman: Dawn of Justice, actor Dan Ambroyer is listed as ‘Drone Pilot’. We never got to see him, as his part was cut from the original movie, but we will be watching for him when the director’s cut comes out on blue ray.

His part was always a mystery and we here at SeppinRek believe that they already have a Green Lantern and Dan Ambroyer is Hal Jordan.

We’re still working on the assumption that we’ll be introduced to at least one Green Lantern at some point during the Justice League films. It just doesn’t make sense not to introduce Green Lantern during JL and we cannot wait to see the Green Lantern Corps. assembled on the big screen.

Let’s just forget the Ryan Reynolds version and move on.